This page isn't complete and can use some help! If you have information to add/change, please fill out the contribution form. You'll get your name on the site!

This page needs: schedule for moves inside scranton.

Note: This guide is for railfanning spots in the Scranton Valley only. For lines and railroads out of the valley, see their respective guide in the navigation.

The Delaware Lackawanna is a shortline in NEPA. Home to 2 main lines, the DL operates north-south from Simpson to South Scranton and east-west from Steamtown to Portland, PA. The DL is well known for buying, restoring, and operating old Alcos! Every train they run consists of Alcos, and usually 4-6 of them! Most locomotives are Alco Century’s, however there are some Alco RS3’s, and even an MLW! You may see some of the DL’s heritage units, typically the LV C420 and the CNJ RS3. The DL typically runs at least two trains a day, with the exception of Saturdays. Railfanning in NEPA wouldn’t be complete without seeing at least one DL move; the clanking noises from 6 Alcos is unforgettable! Passenger excursions also run on the DL’s lines. Between the Baldwin 26 and the EMD F3A’s, I couldn’t say what’s more fun to watch! See the passenger excursion schedule here.

NS is the area’s Class I railroad. They own and operate the Sunbury Line and the River Line, and own the Taylor Yard, a busy intermodal transload terminal. They additionally run trains over the RBMN Lehigh Line to save distance. They are responsible for acting as NEPA’s gateway to trade with other states; both the DL and the RBMN rely on them for importing/exporting freight to distant markets.

The RBMN is the United State’s best regional railroad! They own and operate many lines, some double-tracked, all over eastern PA. They consistently announce new growth records, and are quickly becoming a force to be reckoned with in eastern PA. They own and operate the Duryea and Penobscot Yards here, and additionally have a permanent presence at the Taylor Yard, being the operators of the Keyser Industrial Track. The RBMN also owns and operates the Lehigh Division.

The LS is another shortline in the area. While most of its track is in Luzerne County, it does operate some track in Lackawanna County, and interchanges with NS and the RBMN (Duryea).

The Electric City Trolley Museum operates part of the Laurel Line as a tourist attraction. They run an electric street trolley over the line, which boards at Steamtown. See information about rides here.

The Sunbury Line, owned and operated by Norfolk Southern, is the region’s gateway to far away markets. Most of the line is out of the Scranton Valley, so most of the information for this line is on the Sunbury Line page.

The DL Carbondale Line runs from Simpson to Taylor. The north half of the line (Greenwood-Simpson) sees at least a train per day, excluding Saturdays. This line is used majorly to service the large industrial centers in Scranton, so it’s possible to see switching if you are at the right place.

The DL Pocono Line runs from Steamtown to Portland, PA. It is the DL’s biggest line, and sees the most trains. This line also sees the most passenger excursions. Like the Sunbury Line, most of this line is out of Scranton, so most of its information is on the Pocono Line page.

Currently, the track sees a train Monday through Friday, around 8AM-9AM.

The RBMN Taylor Secondary is the line that connects the RBMN Duryea Yard to the Taylor Yard. RBMN train PISB runs on this line each day (except Saturday), and exchanges cars with NS/the Taylor Yard. PISB usually comes late morning-noon.

The Laurel Line, owned by the DL and operated by the DL and the ECTM is a small tourism/freight line. This line has an overhead catenary to run trolley passenger excursions. See information about rides here. The best time to see a trolley is late morning-early afternoon on a weekend in the summer. Freight trains will be seen occasionally around late morning-early afternoon. 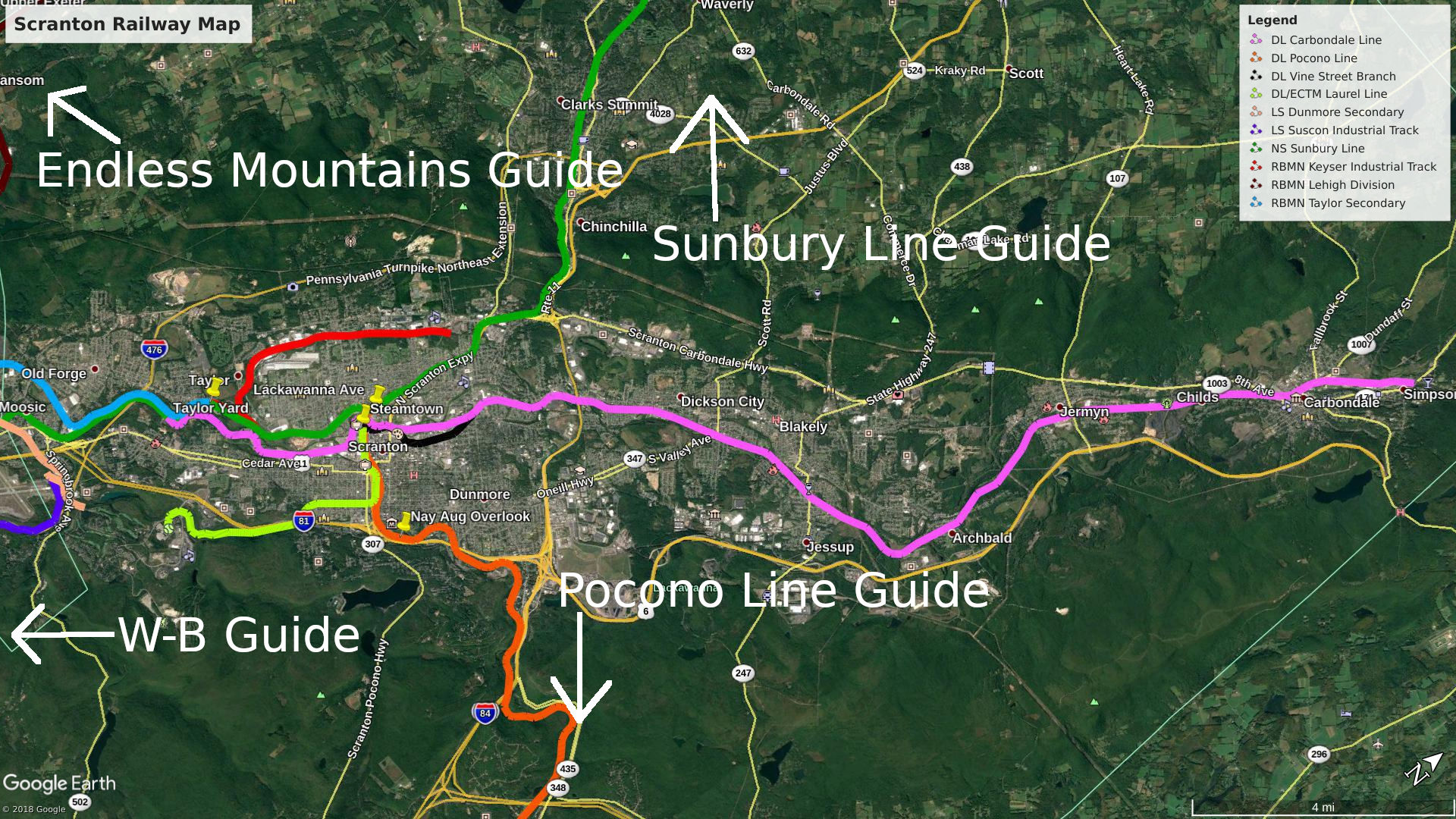 A railfanning map of the Scranton area in NEPA.

I can’t start this guide without mentioning Steamtown. The museum/rail yard is a great place for all to enjoy, with activities for all ages. The rail yard is home to many abandoned locomotives and rolling stock, while the round house and machine shops are home to locomotives and rolling stock that are being restored or are operational. It’s also really close to Lackawanna Ave/the Steamtown Wye, which gives you a great view of the Sunbury Line, and DL3. If you are in the area, you must go and see Steamtown for yourself. You won’t regret it.

The Taylor Yard is another fantastic place to railfan in Scranton. Park at the gravel lot at Depot St, and feel free to walk around (just don’t walk into the yard - stay near Depot St)! You’ll almost always meet someone here who loves railfanning just as much as you. You’ll also get to see the RBMN PISB train, which runs from Duryea to Taylor and back, as well as many NS switching operations. If you continue down Depot St you will arrive at the south end of the Lackawanna River Heritage Trail, which is great for the rest of the family!

Nay Aug park is a fantastic park just on the edge of Scranton. There’s something for everyone here: swimming, hiking, picnicking, photography, a playground, and of course railfanning. The exact location below is a scenic overlook of the Nay Aug Gorge, the Roaring Brook, and the Delaware Lackawanna Pocono Line. At this overlook you’ll see trains entering and exiting the tunnel, so they will blow their horns a lot! The lighting here is best past noon or when it is cloudy.

Below is a map of other railfanning spots in Scranton. Click on them to learn more.